In this interactive two digit addition game, elementary students will practice adding two-digit numbers with regrouping. Click on two cards to match an addition problem with its answer.

Exciting practice is provided in this two-digit addition facts game. The game can be played on computers, iPads, and other tablets. You do not need to install an app to play this game on the iPad. 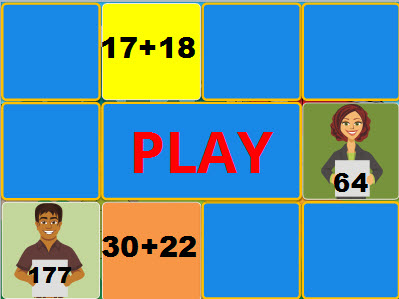 The game is based on the following 2nd grade math standards:

CC2.NBT.5
Fluently add and subtract within 100 using strategies based on place value, properties of operations, and/or the relationship between
addition and subtraction.

CC2.NBT.6
Add up to four two-digit numbers using strategies based on place value and properties of operations.

Return from the Adding Two-Digit Numbers Concentration Game to the Addition Games webpage, or to Math Play.