Elementary students can practice subtraction with regrouping by playing this interactive baseball game.

In this game, students will subtract two-digit numbers from other two- and three-digit numbers. Students will also use models to regroup and find differences. This game can be played in two teams or alone on a smart boards, computers, iPads, and other tablets. You do not need to install an app to play this game on the iPad. Have fun subtracting numbers! 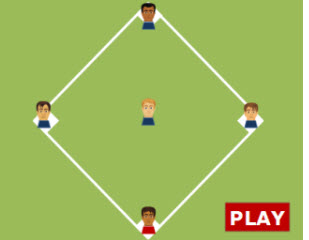 CCSS 2.NBT.5
Fluently add and subtract within 100 using strategies based on place value, properties of operations, and/or the relationship between addition and subtraction.

Return from this Subtracting With Regrouping Baseball Game to Baseball Math Games, 1st Grade Math Games, or to Math Play.