Take a look at this 5th Grade Halloween Math Game in order to strengthen your skill at identifying numbers in the thousands, millions, and billions as they are ordered from least to greatest and from greatest to least. Practice your math skills and have fun destroying different spooky monsters. For each correct answer to a math problem, you will enter a half a minute bonus round.

When playing this game, remember that digits are written in groups of three. Each of these groups are named hundreds, thousands, millions, billions etc. Make sure you know what the problem is asking you to do. It is very easy to mistakenly identify numbers that are listed from least to greatest when the problem asked for greatest to least. For each bonus round, you will have 30 seconds to smash and destroy different monsters by clicking on them. Watch out for a few fast moving monsters, as they are not too easy to catch. The game can be played on computers, smart boards, iPads, and other tablets. You do not need to install an app to play this game on the iPad. 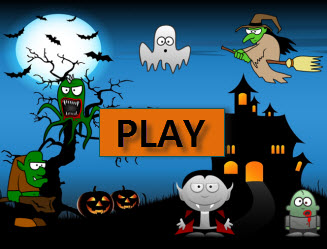 Return from this 5th Grade Halloween Math Game to the 5th Grade Math Games webpage, or to Math Play.