In this millionaire-style game, students will practice changing fractions and decimals to percents. 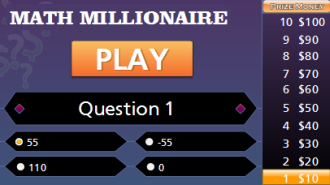 CCSS.Math.Content.6.RP.A.3.c
Find a percent of a quantity as a rate per 100 (e.g., 30% of a quantity means 30/100 times the quantity); solve problems involving finding the whole, given a part and the percent.

Return from Changing Fractions and Decimals to Percents Millionaire to Millionaire Games, or Math Play.